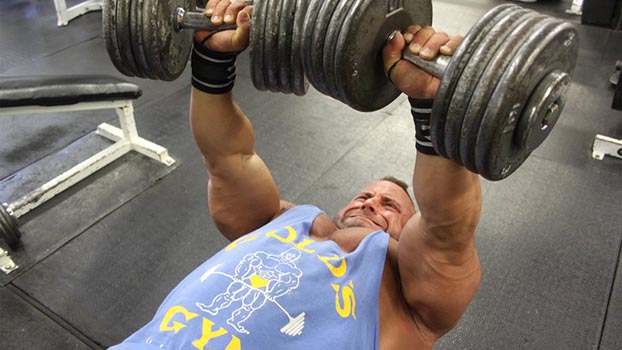 To pack on the muscle, all you need to do is reach for the heaviest weight you can possibly handle, right? Not so fast. Hypertrophy is about the way you lift, not what you lift.

One of the biggest misconceptions when it comes to hypertrophy (the scientific term for muscle growth) is that the only factor in building bigger muscles is lifting heavier weights—and that one automatically leads to the other. This myth has been perpetuated for decades by the bodybuilding and fitness industries, as well as by bodybuilders themselves. The fact is that the key to increased muscular hypertrophy is increased intensity—though genetics can play a role in just how big your muscles can become.

Sure, lifting heavier and heavier weights over time is itself one way to increase intensity. The downside is that lifting heavy can lead to muscle, joint, and tendon pain and injuries and eventual burnout. When you use intensity techniques, you can use less weight, so there’s less wear and tear on your body. It also provides a break from the usual way you train and can help you break through plateaus, and it gives you the ability to develop your mind-muscle connection.

When you learn to focus less on how much iron you can hoist, and more on the techniques you use to hoist it, you’re on the road to maximizing your body’s muscular potential.

Why The Myth Persists

There are several reasons why the “bigger weights = bigger muscles” myth won’t die. The first and most obvious reason is that when people first start working out regularly, their body usually responds quickly with lots of new muscle growth. Without much knowledge of how hypertrophy works, it’s logical to think you should just keep piling on the weight…until you injure yourself or hit a plateau.

Beginner lifters also see bodybuilders in the gym and on the internet lifting super heavy and figure: “Hey, this guy’s chest is so big because he’s benching 10 reps at 315. I need to bench that, too!” But for most people, comparing yourself to an IFBB pro bodybuilder is a bad idea. These men and women have worked hella hard to get where they are. You could work hella hard, too, but unless you have the right genetics, your odds of making it into this elite group of athletes are not great.

In my experience, a lot of these elite lifters don’t realize the role genes have played in their success. They think that if everybody else in the gym just lifted harder and heavier the way they do, they’d be swole just like them. Without those genes, though, you can build an amazing physique— just maybe not a showstopper.

So, what builds muscle? Intensity. But remember, intensity is intensely personal. I can grimace, grunt, and groan, throw the weights around and get them to sound the Lunk Alarm on me at Planet Fitness, but at the end of the day, intensity is subjective. Only you can feel how hard you’re working. No one else in the gym can get inside your head and body and experience what you’re experiencing.

Is lowering your reps and piling on the weights from workout to workout the way to increase intensity? Definitely. But after a while you’re going to hit a wall in your ability to increase both your strength and your muscle mass—and to do it without tearing up your joints. It’s best to have a few tricks up your sleeve.

Some other intensity-increasing techniques aren’t as glamorous, but they’re effective and, quite honestly, they’ll seriously challenge you if you work them hard! Here are four of my favorites:

1. Shorten The Rest Periods Between Your Sets

This is one of the easiest ways to increase intensity. How long do you rest between sets? Don’t know? Time yourself, then work on reducing those times. Shortening your rests means you’ll probably have to lower the weight you lift.

With shorter rests between sets, powerlifter and NPC competitor Oluseye Osinowo ramps up the intensity of his deadlifts.

We’ve all seen those guys blasting max weights in the gym, then sitting there for 3-4 minutes between sets as they get their breath back. That’s not going to happen when you’re resting 30-45 seconds. You’re lowering the weight but increasing the intensity, which means you’re still lifting hard!

2. Change Up Your Rep Tempo

You can also switch up the speed of your reps. Here’s a couple of examples of how you do this:

IFFB pro Super heavyweight bodybuilder Kamal Saraireh slows down the tempo to build up the intensity.

3. Fatigue Your Muscles Before Your Central Nervous System

The late, great Robert Kennedy (the man who founded MuscleMag International, not President Kennedy’s brother) espoused this technique in his book “Savage Sets!: The Ultimate Pre-Exhaust Pump Out,” as did Joe Weider in his Weider Pre-Exhaust Principle.

Here’s how it works: Imagine it’s Monday (National Bench Press Day). Before lying down for some barbell bench presses, complete several sets of dumbbell flyes. Before you even start your first set of benches, your chest will already feel a bit torched. Thus, you won’t be able to go as heavy on the flat benches…but you won’t need to. The lighter-weight workout will still feel plenty intense.

The idea behind pre-exhausting your muscles is to enable you to work the target muscles just as hard but at a lower weight. Doing so limits the force on your joints and tendons. It will also work your muscles very hard before you fatigue your central nervous system.

4. Run The Rack With Dropsets

Nothing burns a muscle more than stripping off weight as you progress through your set. I remember doing dropsets in high school under the watchful eye of my gym teacher. We’d do as many reps as we could on the universal machine then, when we couldn’t do another rep with good form, he’d pull the pin out of the stack to lighten the weight and tell us to keep going.

You can use this technique with machines, cables, barbells, or dumbbells. If you’ve never run down a rack of dumbbells, switching to lighter and lighter pairs as the lactic acid builds up, you’re in for a treat!

Next time you feel bored with your workouts or hit a plateau, give any of these techniques a try. You’ll feel sore the next day, but you should also produce some epic gains. If you stick with it—and if mother nature was nice to you when she handed out the genes—you just might see some big changes in the mirror!